The Story of How I Got Fired… (It wasn’t due to a COVID layoff, sort of)

The Story of How I Got Fired & Started Metamorphosis 101 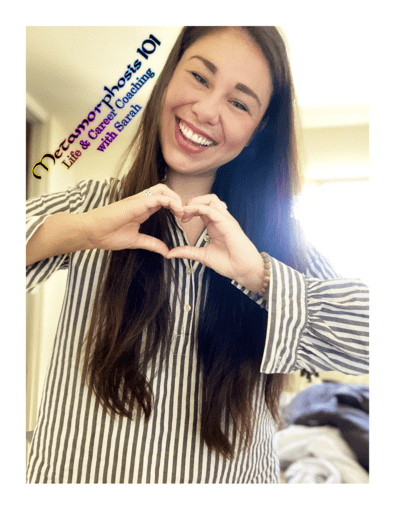 *This blog is copied from a LinkedIn post from June, 2020*

I’ve seen so many posts over the last few days about folks losing jobs…. it is truly heart breaking to see so many face forced transition, and change.

I too, lost my job in late January.

About a week before I was terminated, I went to urgent care with a 104 degree fever. My whole team was aware of how sick I was.

I can’t tell you whether or not it was COVID (testing wasn’t available yet), but this illness was like nothing I’ve ever experienced.

I was prescribed some medicine, drove over to CVS, and had my car window smashed in when it was pouring rain.

When I returned on Monday, my boss immediately confronted me about not notifying him appropriately.

I advised him that I was still nursing my physical health and needed space before he scheduled numerous meetings to discuss this absence. I was mentally traumatized and was suffering from panic attacks.

He & HR were well aware of my anxiety. I informed them from day 1 and continued to I advise that was dealing with symptoms of post-traumatic stress due to the car break-in.

They forced meetings anyways, rehashed over and over the “mistake” and “disrespect” I had for not notifying them.

HR advised that “I should have known to wake myself up prioritize contacting my boss”… when I was literally incapacitated for 2 days in my bed.

This ultimately lead to my termination because I refused to stand for their treatment. I “lost” my cool in the office and screamed about the injustice. My manager took my laptop and said don’t come back.

ALL OF THIS after hinting that I may be promoted within the next couple months….

After sending me to LA the week before for an expensive training seminar…..

About a week after getting fired, in early February, I was involved in a vehicle accident. Totaling my car (for the 2nd time in my life!)

They submitted me to a 72-hour mental hold that truly changed everything for me, forever.

I have generalized anxiety disorder, that can lead to extreme need for perfection and insane levels of over thinking.

The series of events in January: getting really sick, being fired in such an unfair way, having my car broken into, then totaled, being told by numerous people there was nothing I could really do about it other than move on, and facing years of unresolved sh*t left me completely shattered.

As I sat in that mental hold, I felt such deep rage and anger that almost circled back to relief and the deepest gratitude I’ve ever felt.

It was a real sense that while this was hard now, it was all very purposeful.

I sat in my cell, in meditation for 48 hours straight. I reached a true level of clarity and calmness during that mental hold that I cannot explain other than “divine” — my spiritual beliefs are for another time, but I have NEVER felt this sort of connection to a higher power before.

I left the 72-hour hold completely transformed. I knew I was standing at a major cross road. After years of failing in the 9-5 world, it felt so clear that this was the time to take that leap of faith, to finally chase my entrepreneurial dreams.

At first, I wanted to become a freelancer and offer digital media, content creation, and other writing services. These are all areas of interest but it didn’t feel quite “right”

When the quarantine took effect & unemployment rates began to spike, I offered free resume revisions to my network as an offering of support. I got a great response and as I worked with resumes (after a couple years away from job coaching) quickly remembered my strengths in this area.

I spent three years (the most successful years of my career) working with military veterans as they transitioned, providing employment services and support.

Things began to “click” into place and around early-April, my path towards coaching became fully illuminated.

In order to make it as a coach, I knew I needed to make drastic and swift changes.

In the last 4 months, I have gone completely sober.

I drastically altered my diet, giving up meat.

I sit in meditation every day for 20-60 minutes.

I go for a walk every day and practice yoga.

As I established a healthier daily routine, I knew I would need to integrate support to accomplish my goals.

So, April-May I hired two coaches to get my business started and gain the critical mentorship that I needed.

I built my website in early June and launched the business officially on June 25th.

I have continued consulting with dozens of coaches and mentors to understand every aspect of my business: taxes, legal, marketing, business plan, financials, how to obtain lenders; THANK YOU to anybody who I have spoken with who may be reading this.

I journal every day and work prudently towards a life that serves myself and the community around me with deep, genuine purpose that I have always known I was capable of!!

I could have NEVER accomplished any of this had my path not moved exactly the way it did.

Everything I have faced, my professional journey, my education, experiences, interests, skills, have led me to this! I know deep in my heart that coaching, mentorship, and advising others is my soul’s purpose. It is the work I was born to do. And now, I have the rest of my life to figure out how best I can help others thrive.

Your darkest moment, the seemingly unfair situation that you are being put into, is all a part of your magical journey. See it for what it is: your next opportunity!

Now that you’ve heard my story, I want to hear yours. I offer free consultations for career coaching (includes LinkedIn profile optimization, resume review, and other job search skills) and meditation and mindfulness coaching. I would be sincerely honored to hear from you!

We use cookies on our website to give you the most relevant experience by remembering your preferences and repeat visits. By clicking “Accept All”, you consent to the use of ALL the cookies. However, you may visit "Cookie Settings" to provide a controlled consent.
Cookie SettingsAccept All
Manage consent

This website uses cookies to improve your experience while you navigate through the website. Out of these, the cookies that are categorized as necessary are stored on your browser as they are essential for the working of basic functionalities of the website. We also use third-party cookies that help us analyze and understand how you use this website. These cookies will be stored in your browser only with your consent. You also have the option to opt-out of these cookies. But opting out of some of these cookies may affect your browsing experience.
Necessary Always Enabled
Necessary cookies are absolutely essential for the website to function properly. This category only includes cookies that ensures basic functionalities and security features of the website. These cookies do not store any personal information.
Non-necessary
Any cookies that may not be particularly necessary for the website to function and is used specifically to collect user personal data via analytics, ads, other embedded contents are termed as non-necessary cookies. It is mandatory to procure user consent prior to running these cookies on your website.
SAVE & ACCEPT